Under King Alfred the Great, England in the ninth century made considerable military, political, cultural, and some ecclesiastical recovery from the Danish invasions. But it was not until the following century that there was a revival of monasticism. In that revival, the leading figure was Dunstan. 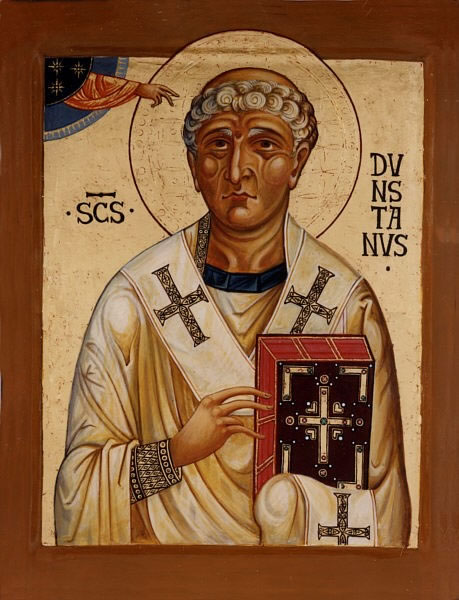 Born near Glastonbury of a noble West Saxon family with royal connections, Dunstan received his education from Irish monks at Glastonbury and joined the household of his uncle Athelm, archbishop of Canterbury, and then the court of King Athelstan. In 935, accused of “studying the vain poems and futile stories of the pagans and of being a magician”, he was expelled from court. In 936 he made a private monastic profession to Alphege, bishop of Winchester, and was ordained to the presbyterate. He returned to Glastonbury, where he lived as a hermit and practised the crafts of painting, embroidery, and metalwork. In 939 Edmund became king of Wessex, recalled Dunstan to court, and installed him as Abbot of Glastonbury in 943, endowing the monastery generously. The Danish invasions and the hostility of local magnates had, in the previous century, nearly extinguished monasticism in England, and the restoration begun under Dunstan, following the Rule of St Benedict, was to be one of his principal achievements. Dunstan attracted disciples to Glastonbury, enlarged the buildings, and gave new life to a monastic establishment of already great antiquity.

With increasing age Dunstan spent more of his time at Canterbury with the monks in his household, occupying himself with teaching, the correction of manuscripts, and the administration of justice. He remained active until his death, preaching three times on Ascension Day in 988. He died two days later, May 19, aged nearly eighty. It has been said that the tenth century gave shape to English history, and Dunstan gave shape to the tenth century.

adapted from The Oxford Dictionary of Saints, Lesser Feasts and Fasts, and The New Book of Festivals and Commemorations

Almighty God who raised up Dunstan to be a true shepherd of the flock, a restorer of monastic life
And a faithful counsellor to those in authority
Give to all pastors the same gifts of your holy Spirit
That they may be true servants of Christ
And of all his people;
Through Jesus Christ your Son our Lord,
Who is alive and reigns with you,
In the unity of the Holy Spirit,
One God, now and for ever. Amen.

Select a date with a blue background to see the thought for that day. Use the arrows to cycle through months.

Thought For The Day