Saltash, being at the “Gateway to Cornwall”, stands on the River Tamar and is connected to main areas by the A38 (Parkway) trunk road over the Tamar Bridge which was built in 1961 replacing the Saltash Ferry which had been operating since before 1832, when the first steam ferry started. 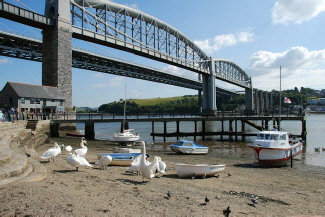 Plymouth is just five miles away and easily accessible by bus and train which travels over the famousRoyal Albert Bridge built by Isambard Kingdom Brunel and opened in 1859. Plymouth, with its university, main hospital, medical school, dock yards, call centres and other service industries has become a commuter town for many of the Saltash residents and as such PL12 is one of the most sought after postcodes in the UK.

Saltash is a busy, friendly town with many organisations working working together in annual activities such as the May Fair Calibration, the Saltash Regatta and the Town Carol Service, to name but a few.

Both St Stephens by Saltash and St Nicholas & St Faiths are very much a part in the Saltash community and celebrations. Both churches participate in the May Day event with stalls and refreshments.  The Parish Churches are often called up on to provide the venue for the Civic Services and The Remembrance Day Service.